Dear mom in the carpool line with the GIANT bumper sticker displaying your beliefs on circumcision*:

If your kids aren’t already embarrassed to be seen with you, they will be as soon as they can read.  Try zombies, or cats, or…anything really, that doesn’t imply a visual of your child’s genitals.  I understand, it’s an important issue to you, but come on, mama!  How would you have liked your mom’s minivan (already not cool) to display that her baby got her first period and what kinds of pads she will be buying you?

I promise I will not slap this kind of embarrassing detail about my boys on the ass of my storm trooper, or any other public protrusion. Because I want my boys to feel confident that I will not announce to the world what they look like naked.  “Oh hey, did you know that this boy has a birthmark right in his butt crack?  Yeah, it’s so great I made it into a bumper sticker!”

Now I’m worried that I’ll meet penis lady at the school or something and get into a conversation…”so, you say you have three boys?  Can I ask you about their penises?”

Here is an example of the kind of thing you should put on your car if you have boys:

I’ll spare you the visual of what NOT to put on your car.

Ok then, carry on with your good causes, and please don’t reference genitalia on your vehicles.  Your kids will thank you.

*I am not judging anyone’s decision for or against circumcision. 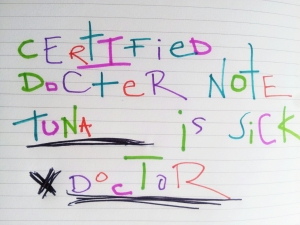 Tuna (my oldest) was scheduled to get a filling at the dentist today. I was going to have to wake up the baby and drag all three monsters to this appointment, and probably have to leave Binker (the middle boy) in the waiting room alone while I took Squishy in to comfort Tuna while he tried to talk constantly (his M.O. always) with his mouth cranked open. I have been dreading this appointment since I scheduled it. So has he. I know that he knows I was dreading it because of the gloom in my voice when I warned him that I had to bring the babies, even though I assured him that it would be ok…that and he may have overheard me talking to my sister about how much I was dreading it…

So he gave me an out:

“I feel sick to my stomach and I feel hot and I also feel like my throat is goopy.”

I said it was probably nerves and gave him the “I’m on to you” mom look.

“No really, I’ve felt sick since before snack at school.”

He swears it isn’t nerves. I told him to try to poop. He humored me.

“Hm, well if you really are sick you have to rest.” (It’s raining, he has to stay inside anyway.)

“Ok, I paused LEGO Batman downstairs, can I go down and play that? That’s resting.”

And his big NOT SICK grin as he trotted downstairs was a serious foreshadowing of my future relationship with this boy…I’d better be careful how many times I actually let this “I’m trusting you this time” wink wink actually fly.

It’s a win win anyway, for real, because I really really didn’t want to go.

I dug up an old facebook rant.  Here you go, and please bask in your enough-ness:

I am tired of seeing “make every moment count!” on all the “parenting things”. I mean, sometimes you just have to get through a moment without snapping and/or developing a nervous twitch because maybe you seriously can’t handle one more whine. Some days my kids are just lucky I drink wine.  I just really don’t have the personal capacity to be Mary Poppins in EVERY MOMENT. I guess that’s a moment that counts–when I stop giving a shit for a MOMENT. Or maybe it’s those moments I’m actually COUNTING to ten that count. I mean, I put love notes in lunch boxes and read to my kids, but really, we are not the mythical perfection that these people guilt you into thinking you should be. Moms, we make a lot of moments count, and please let’s not count how many. A lot is good enough.

Unsolicited advice for shit you didn't know you were doing wrong

Finding Joy in the Journey

I'm just doing my part to uplift others.

A SE Michigan in-person meet-up group for gifted children and their families!

A welcoming yoga community since 1995

A Look Into My Kitchen, Recipe Collection & Life

Thoughts Appear
Diary Of A Traveller

adventures of a mere mortal in fitness and life

One Day at a Time

Living my life with Thyroid Cancer