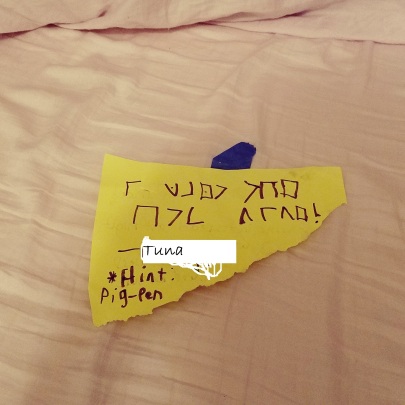 I came out from putting the littles to bed to find Tuna running out of my room looking guilty. He said he left something for me to solve. Uhhh, anyone? Runes? Gah, my kid is smarter than I am.

Tuna shakes his head, smacks his forehead, “You don’t know your history, do you?”

Me: “I know quite a bit of history, just not this code.” (little punk)

Tuna: “Ok, here’s another hint: think Free Masons. You need to look it up and learn it.  Then we can leave each other notes.

Wtf?  Because it’s too easy to just write notes in English?  And why/where is he learning codes from the Free Masons?  I mean, I agree that they’re fascinating (in fact, we had a conversation a while ago about them); but seriously? Can’t we just do something relatively normal around here? (Stupid question, duh!)  This kid…

I know I did stuff like this as a kid.  I absolutely love it that he is interested in stuff like this (he is obsessed with history, especially ancient Egypt). I will learn the darn code and write him maybe one reply, and then we can do the cute note thing with actual words. I get it, he doesn’t want Binker reading our notes.  But maybe cursive will do for a while??

I love that kid.  And, wtf?  And, what the hell does pig pen have to do with the Free Masons?

And he’s the one smacking his forehead.

Unsolicited advice for shit you didn't know you were doing wrong

Finding Joy in the Journey

I'm just doing my part to uplift others.

A SE Michigan in-person meet-up group for gifted children and their families!

A welcoming yoga community since 1995

A Look Into My Kitchen, Recipe Collection & Life

Thoughts Appear
Diary Of A Traveller

adventures of a mere mortal in fitness and life

One Day at a Time

Living my life with Thyroid Cancer